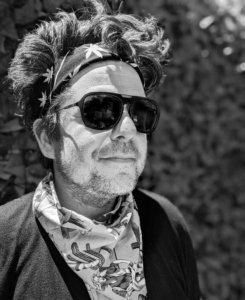 Shawn Nuzzo tries to makes art with his friends.

By day, Nuzzo was a dependable assistant film editor working on a string of largely forgotten films, including: BLAIR WITCH 2, SWIMFAN, IT RUNS IN THE FAMILY and MR. 3000.

By night, Nuzzo was a columnist for the indie-culture magazine UNDER THE VOLCANO and lyricist for The Clap, working under his nom de plume, Shawn Clap. Foolishly, he abandoned all his artistic pursuits for a steady series of unfulfilling paychecks in the seedy underbelly of Corporate America.

In 2017, the New York native skipped town and settled in old Hollywood with his wife, Jen, and their dog, Boots. After enrolling in some comedy-writing classes at the Groundlings his desire to connect subjects with predicates began anew.

He’s been volunteering at CineStory since 2018.