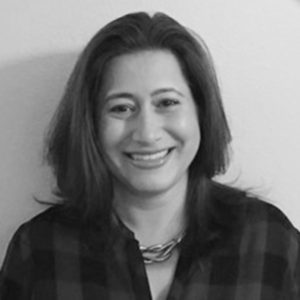 Leah Estrin was born in Los Angeles and raised in Los Angeles and Orange County making her very much a So-Cal native. Her first job was teaching young kids dance. After getting a BFA in Film Production from Chapman University and an MFA from UCLA’s Producing Program, Leah started her career at Imagine Entertainment. During her 11-½  years at Imagine she moved up the ranks from assistant to story editor to creative executive. While at Imagine, she worked on multiple projects including INSIDE MAN, FUN WITH DICK & JANE, TOWER HEIST, UNDERCOVER BROTHER and INSIDE DEEP THROAT.

After leaving Imagine, Leah was a freelance executive for Disney Channel Original Movies. Over the course of her time with Disney Channel, Leah helped to bring in new material and set up multiple projects including the book MY INVISIBLE SISTER, which was made into the 2015 TV movie INVISIBLE SISTER.

In 2014, Leah moved into consulting and teaching. She has taught producing and story development classes at California State University Dominguez Hills and for the high school workshop Film2Future. She is also an external development assessor for Film Victoria in Melbourne.

Leah began her journey with CineStory in 2010 as a mentor for the feature retreat. She had an amazing experience that led to her becoming a Board member. When the decision was made to expand the foundation to include a Television/Digital division, Leah stepped away from the board to help create and run CineStory’s TV Retreat and Fellowship program.

In 2016, Leah’s life went full circle when she became the proud partner in her family’s dance studio in The Dance Centre in Orange, California. She is now back to teaching dance & helping to run the studio with her mom.

Leah will tell you that she always feels behind juggling her work running the dance studio and overseeing the CineStory’s TV Retreat and Fellowship program, but she loves both jobs. She will also openly admit that she takes a nap whenever she can because let face why becoming an adult meant giving up naps.